ON ASIAN SIDE ISTANBUL

Üsküdar is located near the Bosphorus Strait, located on the Asian side, and also it is one of the most historical districts of Istanbul where has stunning views of the Bosphorus. The history of Üsküdar dates back to 1,000 BC. that according to wide research, Üsküdar was founded by the Phoenicians. The district had been ruled and hosted for centuries, such as; Persians, Achaeans, Greeks, Macedonians, Romans, Arabs, and the Ottomans. Üsküdar was named Chrysopolis, which means the “Golden City” by the Greeks. Üskudar has always been an important district throughout history that one can see the traces of the Ottomans and the Romans even today. The district houses more than 180 mosques: Mihrimah Sultan, Şemsi Paşa, Yeni Valide Mosques, and wooden houses where you can explore the hidden gems of Istanbul on the Asian side. It houses Greek, Roman Orthodox, and Armenian churches. Üsküdar also has Bet Yaakov and Bet Nissim synagogues. Üsküdar has some popular neighborhoods such as; Beylerbeyi, Kuzguncuk, and Çengelköy, which are lying along the Bosphorus. The most well-known symbol of Istanbul, which is the Maiden’s Tower, is located in Üsküdar. 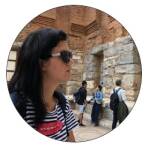